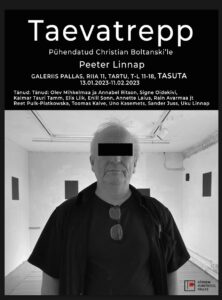 L’Hommage to artist and friend Christian Boltanski (1944-2021). In the Memory

Twenty years ago, I noticed that people in Estonia die at an amazingly young age. Estonia was once again an European country, but our life resembled and sometimes still resembles natives dying in the reserve. There are a series of strange reports of missing people appearing in the newspapers, most of whom, unfortunately, have turned out to have passed away a little later. These incidents have always been “non-violent”, we have never really found out why one or another young person died.

In the last few decades, a series of very well known people, our spiritual leaders in the arts, science, business and politics, have left us in a way that is difficult to explain. In an attempt to explain the death of some great musician, artist or theater performer, reference is made symptomatically and unthinkingly to alcohol addiction and the seemingly inevitability arising from it, that it could not have been otherwise at all. However, there remains a big void and a question mark over the people who have passed away.

Is every single case just an isolated case? Isn’t there a law, a larger system, a statistical pattern drawn from these deceased? Why is it all so similar to Indians on reservations, where the lifespan is also vanishingly short? Why?

Our number of drug deaths is 20in/ 100,000 inhabitants, which places us “at the top of the table” with the USA and England. These deaths are often classified as suicides (young people) or heart failure (elderly). Deaths due to HIV are separately excluded from the statistics, they are considered to occur only “as a result of the disease”. The statistical reports show a sharp increase in the suicidality curve in the 1990s, at the time of independence. It remains for us to guess whether the reasons for this were the disclosure of people’s previous backgrounds? Did families lose trust at that time when it became clear who was “married” to whom? In the 1990s, the old nomenclature jobs also disappeared, nothing anymore guaranteed the application for those for whom it had previously been “state-guaranteed” and carefree. Alcohol deaths were gradually replaced by drug and HIV deaths, which were completely new phenomena. In recent times, human trafficking has also intensified, the scope and content of which we can only barely guess. Rather, however, our knowledge of such deaths is based only on a vague hunch, accompanied by a naturally intense fear. For some time now, we have been in a transition society*, which has been adequately modeled by Arend Lijphard and Rein Taagepera**, clearly showing that there are always obstacles to the main direction of transition. And these forces have been at work for a long time.

Thus, an inexplicable fear of early deaths accumulates, which has once again begun to significantly define the behavior of our society. It’s like there are 10 of us in total, of which one regularly decreases every day. In this scenario, the motif of the staircase stands out as one of the strangest recurring elements. “Falled down the stairs in a manor, workplace or nursing home, found dead on a cottage staircase or slipped on steep steps,” the newspapers write. We believe a little of what is said, but something in us is constantly cringing.

* In parallel to this exhibition, the gallery Pallas Inta Ruka will show the exhibition “My Fellow Countrymen”, which portrays our neighboring nation of the same period – the Latvians
** For writing the text, I thank Theodor Peeter Linnap, a student at the Johan Skytte Institute of Political Studies, University of Tartu